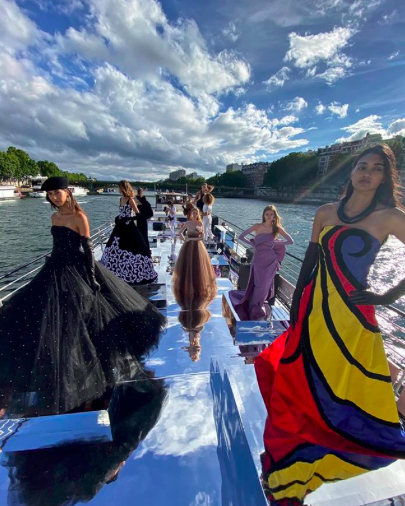 If we were to draw a ranking of those who best interpreted (and took advantage of) the current moment, Balmain and its creative director Olivier Rousteing would be in first place. Without struggling too much thinking about the best medium to bring his Haute Couture Spring 2021 collection to digital platforms, Rousteing simply choose the easiest one, showing that when it comes to hype and effectiveness, exceptional ideas are not always needed.

On July 5th, models wearing Balmain’s Couture boarded a boat on the Seine. They made a complete tour of Paris along the river, while the event was broadcast live on Balmain’s TikTok channel. Which subsequently crashed, as was to be expected: the number of views and new followers reached an amazing result in just a few minutes. To the coverage specifically created by the creative team of Balmain, we have to add all the collateral contents, made by the models first of all, who broadcast live from their smartphones from the boat; and the people along the Seine, who posted videos and photos. It is then easy to understand the power of the whole.

The collection was a success in terms of advertising, and it is highly likely that Rousteing provided a brilliant example for anyone looking for an effective and innovative way of engaging the public for the next future. Not to mention that this involved the Haute Couture itself, historically the most exclusive collection of the fashion system and now, thanks to him, democratized not only online but also offline.

The collection is a mix of new garments and reinterpretation of old outfits – there are 13 pieces from the archive, signed by the designers who preceded Rousteing at the creative direction of the House. The style is sublime, as it is the production of the details. The collection is dominated by black and white, along with few bright colours. Jewels steal the show.