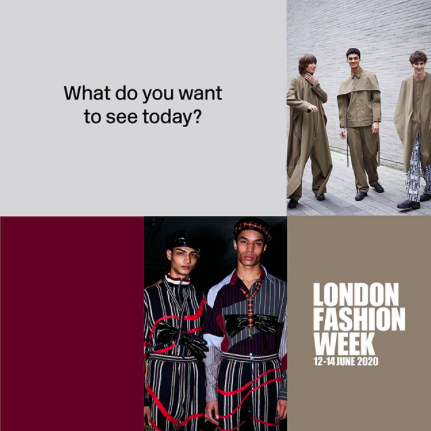 The first Digital London Fashion Week ended last weekend and left behind controversial feelings. Someone is simply enthusiast, some others are not convinced about it. The event has been more of an experiment than a definitive format, of course, and it needs future adjustments. We can anyways say, without doubts, that it left us something to reflect on. To us as home spectators first of all, but also (and probably in a bigger measure) to the big names of the fashion system, which have been the great absents.

The fact that the Fashion Week took place despite of the situation, is in itself a powerful message and, in this very case, absence has been felt more than any other times. Some of the major brands in London did not take part to the panel – Burberry and Victoria Beck just to name two. Their absenteeism have been felt deeply and we really hope to be able to see their collections soon. On the other side, emerging designers and artists filled graciously the empty space, showing spirit of initiative and creativity, producing their projects even in the middle of a pandemic. After all, these are excatly the characteristics any brand must posses right now, especially emerging realities. Creativity, willingness and flexibility, always putting in the first place the creative need of express new ideas and points of view – even if in imperfect and experimental ways.

It is then true that the latest London Fashion Week has been more about art, in the general sense of the word. Garments and collections were fewer than usual, while other types of contents triumphed. Short movies, documentaries, talks and Q&A. Depending on how we look at it, the digital event looks like a denatured Fashion Week, deprecated of its own raison d’etre, or, on the contrary, the manifestation we all needed. With all the social and environmental issues we are facing today, it would be stupid to ask a fashion week to be only a fashion week. In the same way as it would be stupid to wait for the traditional fashion week of the past – even if the past, in this case, was only four months ago. As usual in the fashion system, it only wins who is able to live in the present, making the most of every possibility.

Among the designers in the panel, we found Hussein Chalayan who, in conversation with Elise by Olse, spoke about his quarantine and the new needs born from it. A general slow down, first of all, which can bring to deeper and stylistically more sophisticated collections. The same he used to shock the world with during the 90s.

Marques’ Almeida launched his new line, called reM’Ade and presented with a documentary. The format gave the possibility to show all the creative process behind the collection, which is in this case particularly important. reM’Ade offers original and new design by Almeida, produced only with recycled materials and deadstock of the brand.

An other amazing documentary is signed Osma Yousefzada. The only way to describe it is “touching”, because of the story it tells about Bangladeshi women working in fashion production in their homeland. Their vision of fashion is the opposite of the one we, Western countries, have and the documentary perfectly shows how the trade in unfair and still full of blind spots.

Preen by Thornton Bregazzi have created a short movie to present the collection, and the same did Roksanda. We can see through the screen of your phone inspirational images born during the lockdown, full of energy and dream. Mulberry on its side collaborated with Låpsley, English singer and songwriter whose work is the perfect blend between pop and alternative. The presentation, and the collection in itself, is dedicated to the UK and London, whose freshness is peculiar and still incredibly inspiring today.

Lastly, in order to celebrate the re-birth after the lockdown, the British Fashion Council presented the My Non-Essential project. Composed of amatorial tapes made by the interviewees themselves (personalities of the fashion system from all over the world) it shows all the non-essential place we missed so much in the last couple of months. Every body has its own and, for us, it is also the Fashion Week. Be it in London or in any other city, be it virtual or not, we need of this bizarre field to stay inspired.