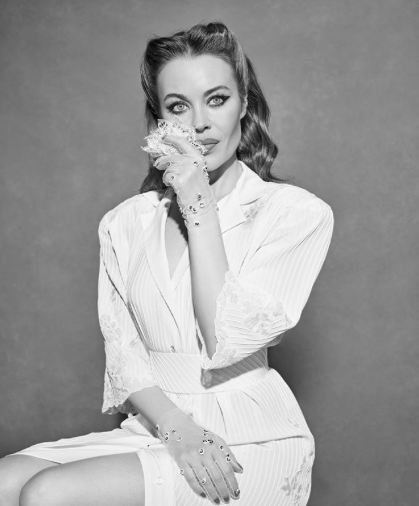 Ulyana Sergeenko presented her Couture collection through a six minutes short movie. The final result, consisting of midi and short dresses, embroidered blouses and a black suit with pence trousers and cropped blazers, is a homogeneous and sophisticated collection, made mainly of black and white garments. The shapes are inspired by the 50s and are therefore characterized by narrow waist, soft shoulders and hips. Black and white photographs of past cinema stars appear on the mood board in the atelier.

The looks created by the Russian brand would have fitted perfectly in the glossy Hollywood landscape of the last century, where sensuality was not shouted but veiled, and had great power in everyday life. Ulyana Sergeenko invites women to rescue their weapon of seduction and use it to their advantage, even if in a playful and light way.

The first part of the short film focuses on the creation of the collection. The filming in the Moscow atelier brings us suggestive images of a hand-made work, whose roots are traced back in tradition and which are easily labeled as art. This is what Haute Couture is about after all, isn’t it? The craftsmanship is mainly woven into the embroideries which, as explained at the beginning, are the modern reinterpretations of traditional Russian patterns, with over 150 years of history. In addition to a beautiful tribute to her culture of origin, Ulyana Sergeenko does a work of saving the memory of a country.

The short is filmed almost entirely in black and white: this gives first of all a retro allure to the whole and, on the other hand, leaves the viewer the possibility to concentrate solely on the laces, the textures and the contrasts. The richness of these decorative elements is such that they even replace jewelry. There is in fact no gold nor precious stones, but only maxi earrings and headbands made of layers of embroidery. The veils are also recurrent: a detail we are destined to see again in the following weeks.